Faith and compassion drive McAllen man who escorts the dead

Juan Lopez picks up bodies for a living. Since the pandemic hit, he gets calls nearly every 20 minutes — and says it’s an honor to do the job.

Along with a full-body hazmat suit and face respirator, Juan Lopez wears at least six pairs of gloves to work – all at once.

He takes a pair off every time he touches the dead body he’s responsible for moving.

The McAllen man has been a human remains transporter in the Rio Grande Valley for two decades, moving corpses from crime scenes, homes and hospitals to funeral homes and morgues. Since the COVID-19 pandemic hit the region last spring, he has never had to pick up so many bodies.

Before the pandemic, Lopez would move about 15 corpses a week through his company, Elite Transportation & Clean-up Service. But during the region’s summer surge, he was picking up as many as 50 bodies a day. Lopez’s phone rings nearly every 20 minutes. 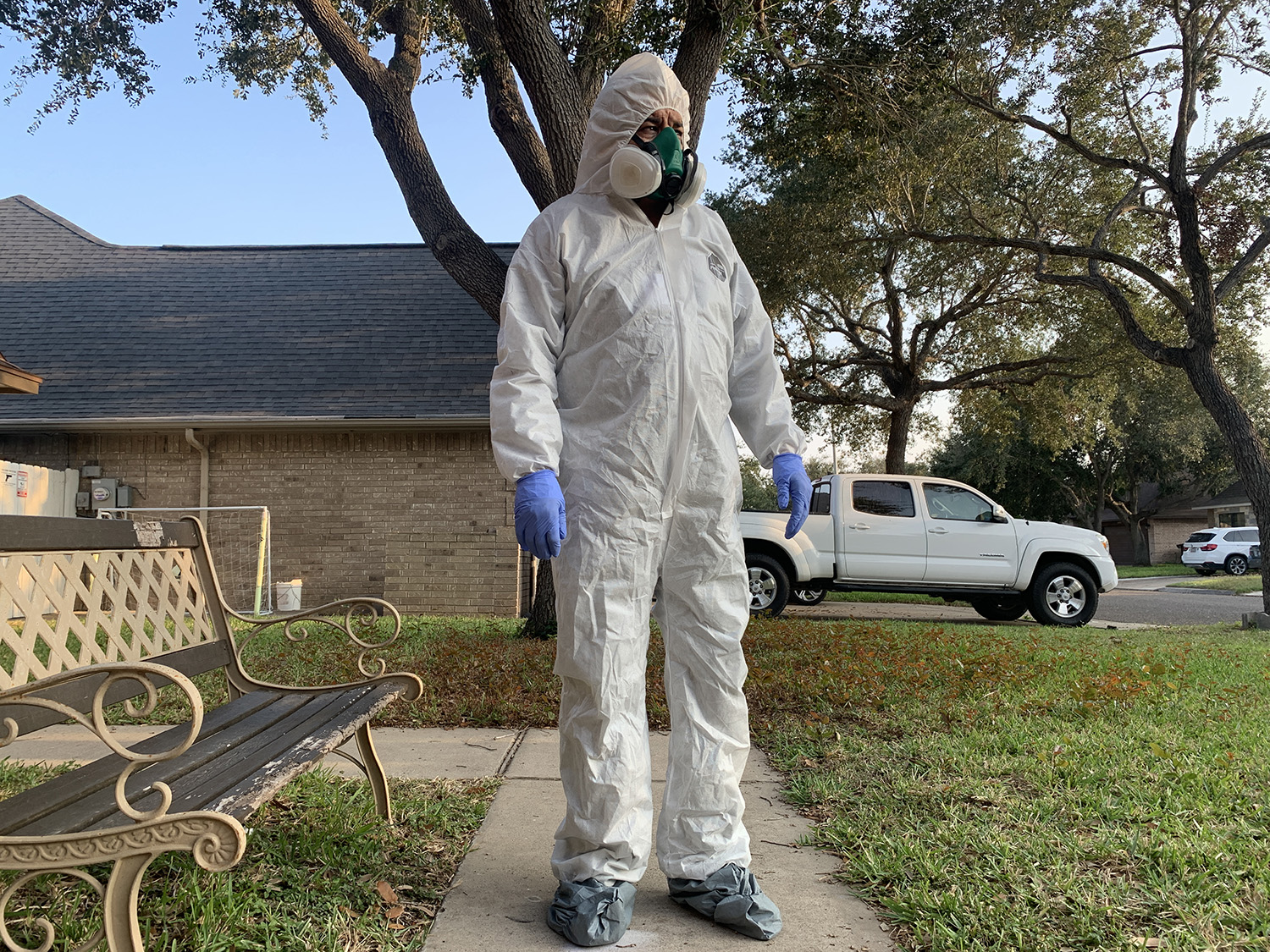 Before the pandemic, Juan Lopez picked up around 15 bodies a day, and during the summer surge of virus cases in the Rio Grande Valley, he was transporting as many as 50 bodies a day. (Photo by Colleen DeGuzman)

“I’m tired that every time I get a call, every time I have to go to a hospital, we already know it was for COVID,” the 45-year-old says. “Not for natural causes, not for accident, not for suicidal, it was COVID, COVID, COVID.”

While hospitals across the region have seen how relentless COVID-19 can be, Lopez sees the sorrow and pain of lost battles.

As of Dec. 4, Hidalgo County has reported 45,387 virus cases and 2,090 deaths. At one point, the county’s death rate was double the state’s average. This was when Lopez would work until 3 or 4 in the morning, sometimes deciding it wasn’t worth going back home to sleep. Instead, he would nap in his car, parked at the county’s morgue, waiting for his next call.

Lopez’s faith has kept him rooted during the last several months; he said it’s the reason he hasn’t contracted the disease. Other people in the body-moving business who have caught the virus have asked him how he’s been spared.

“We are fighting a ghost. You don’t know when it’s going to touch you, when it’s going to catch you. So I think the only thing that we can do is just follow regulations, and more than anything, put yourself on God – that’s the only person that can cover you for everything.” 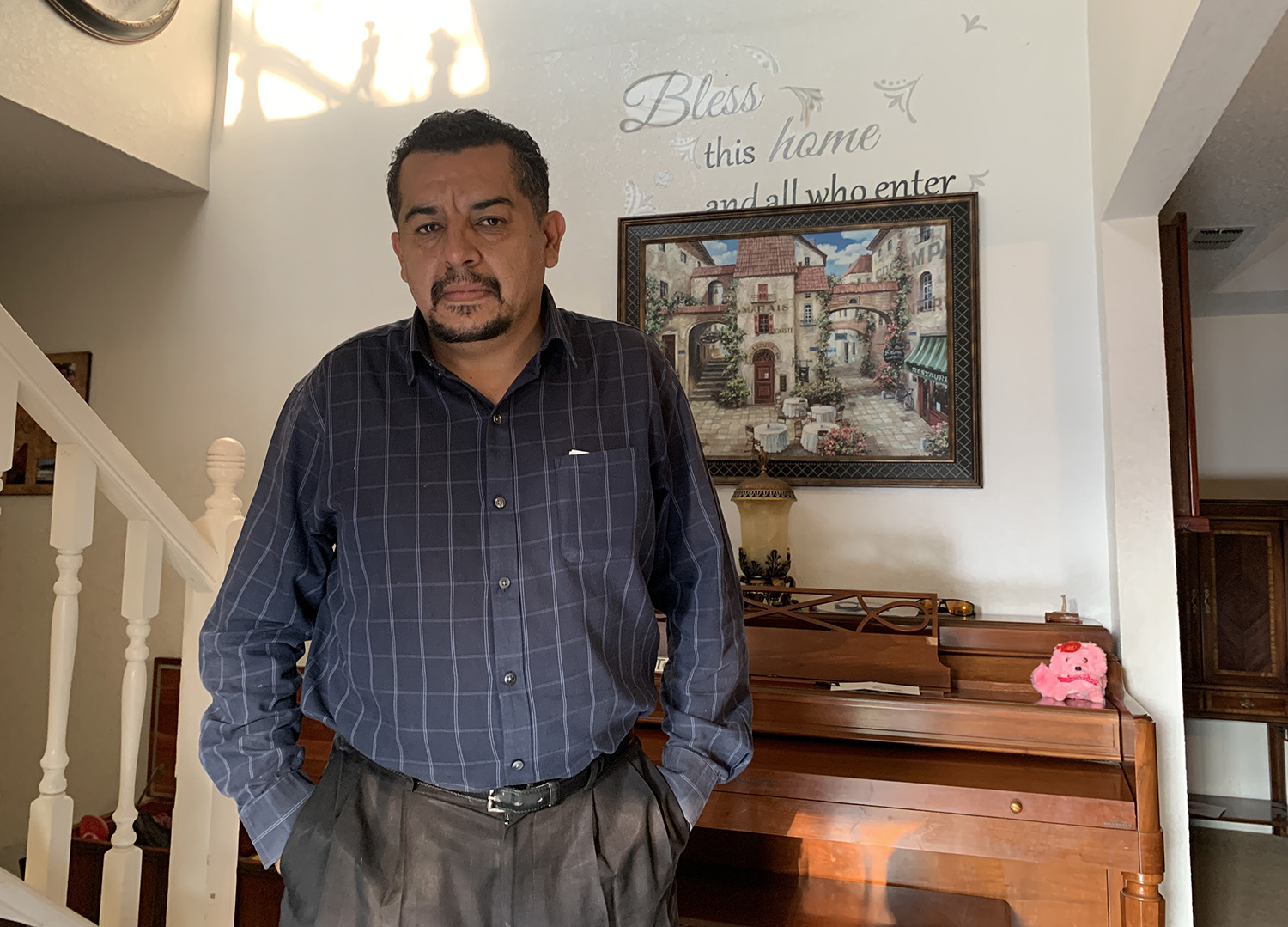 Lopez says God is his best protection from contracting the coronavirus. (Photo by Colleen DeGuzman)

“We are fighting a ghost,” he says. “You don’t know when it’s going to touch you, when it’s going to catch you. So I think the only thing that we can do is just follow regulations, and more than anything, put yourself on God – that’s the only person that can cover you for everything.”

It’s difficult to show empathy through the heavy protective equipment Lopez wears. When he isn’t picking up the bodies of people who died of the virus, he wears only one pair of gloves, and often offers comforting words and a hug to mourning family members.

He is determined to keep compassion at the center of his work.

“[I say to the families,] I am here to take your loved one, and I am going to treat them as part of my family,” he says.

During the early months of the pandemic, Lopez wouldn’t be told whether a person had died of COVID-19. “But you start moving the body and you start seeing tissues, Vicks, cough drops and all kinds of medicines,” he says.

As a father of four, Lopez initially did not want to pick up the bodies of people who died of the virus, but then he had a change of heart.

“Everybody started calling me and calling me,” he says. “And so I said, ‘You know what? This is my call, so let’s see what God is going to put in front of me.’”

Lopez has 6-year-old twin girls, an 8-year-old son and a 23-year-old daughter. Time with their dad is not the only thing the children have had to give up; they’ve also had to sacrifice hugs and kisses when he comes home.

Just as putting bodies in the back of his car is his job, Lopez puts his feelings behind him, too.

Holding in his emotions was impossible for Lopez a few months ago, however, when he had to pick up his own uncle – and found him on the hospital floor.

“I said, ‘I think I have been doing my best to treat dead people as part of my loved ones, and I did not expect that my uncle to be on the floor, like a piece of rag or piece of trash,’” he says, fidgeting with his fingers.

After he filed a complaint with the hospital, staff began to stack bodies on racks.

Just three weeks ago, Lopez says, he saw that local COVID-19 units were empty, and hospitals no longer needed extra refrigerators to store bodies. But lately, the county’s daily count of virus cases has been rising, and he’s preparing for another spike in deaths.

Starting mid-November, the county began reporting daily numbers similar to the levels seen during the summer surge: in the 600s and 700s.

“It’s coming back again, and now we are trying to get prepared, because we know if we are not prepared this time, it’s going to be a mess,” Lopez says.

“But I say, ‘You know what, Lord? You know what you are doing. I am not going to complain, let’s go forward.’ So I am here, doing my best.” 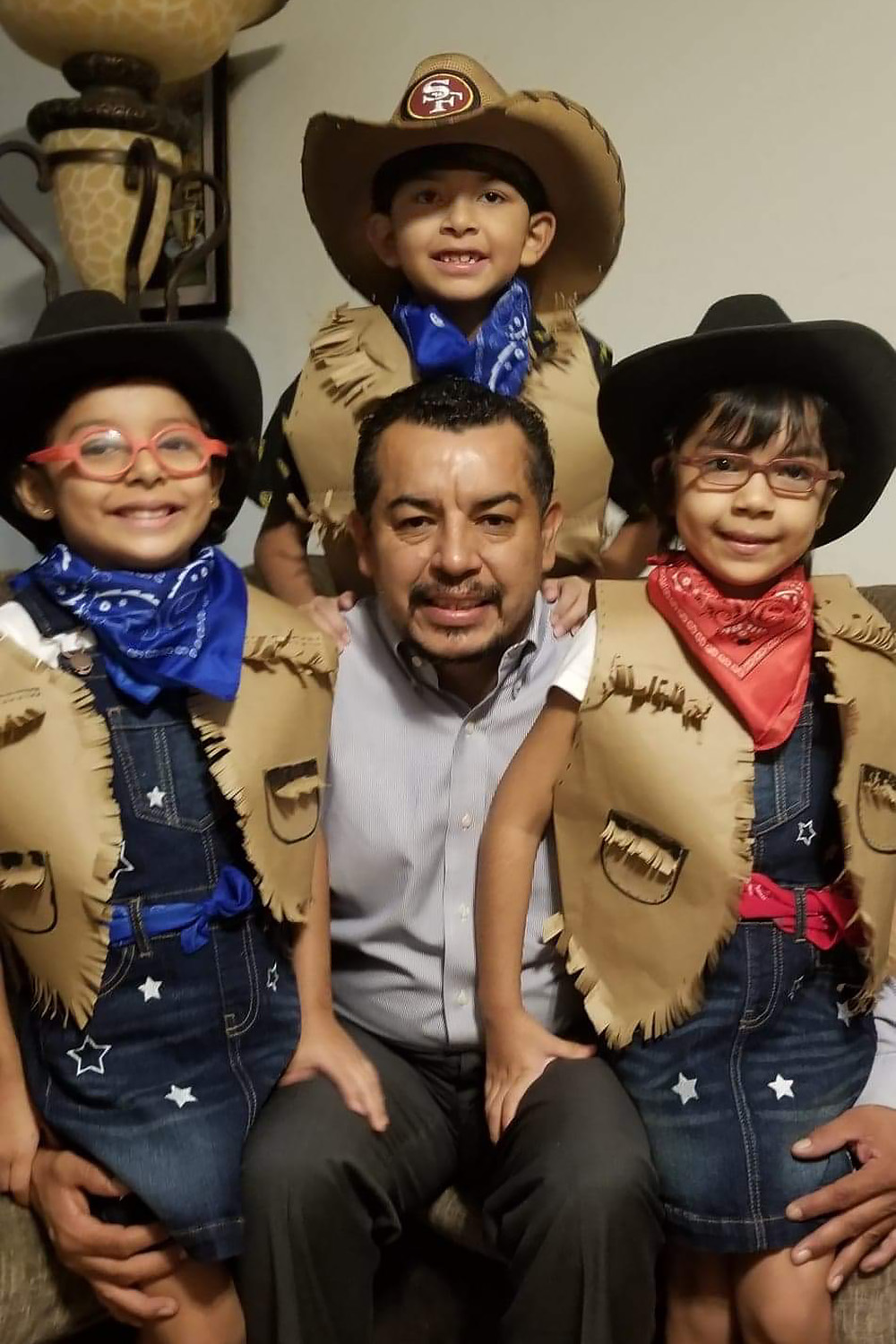 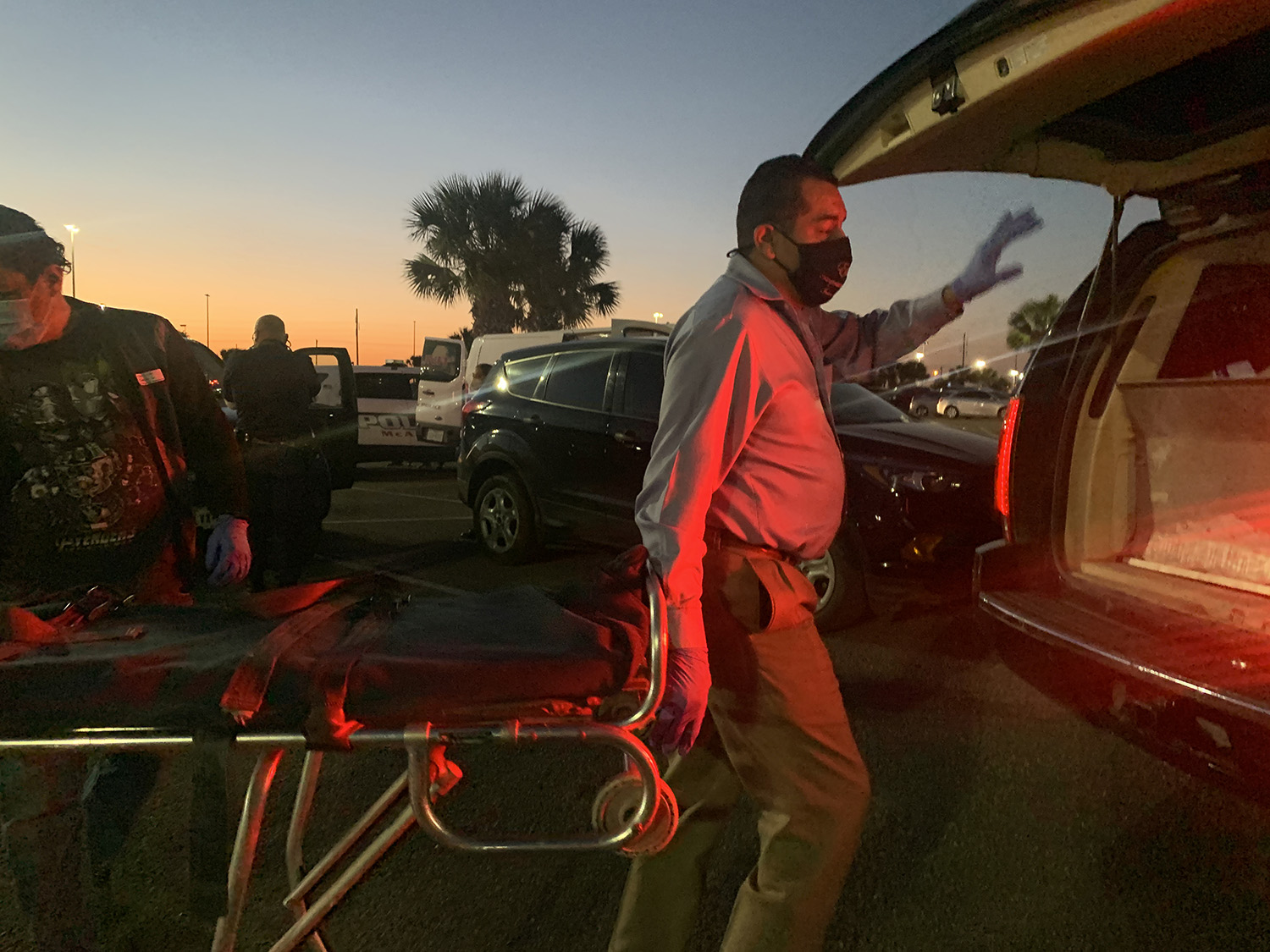 Lopez of McAllen, a human remains transporter for Elite Transportation & Clean-up, responds to a non-COVID-19 related death. The surge of virus deaths have compounded the 45-year-old’s regular workload. (Photo by Colleen DeGuzman)