Sandra Whitley felt alone growing up, so she made it her mission to provide community for others. And even during the pandemic, she refuses to close the door. 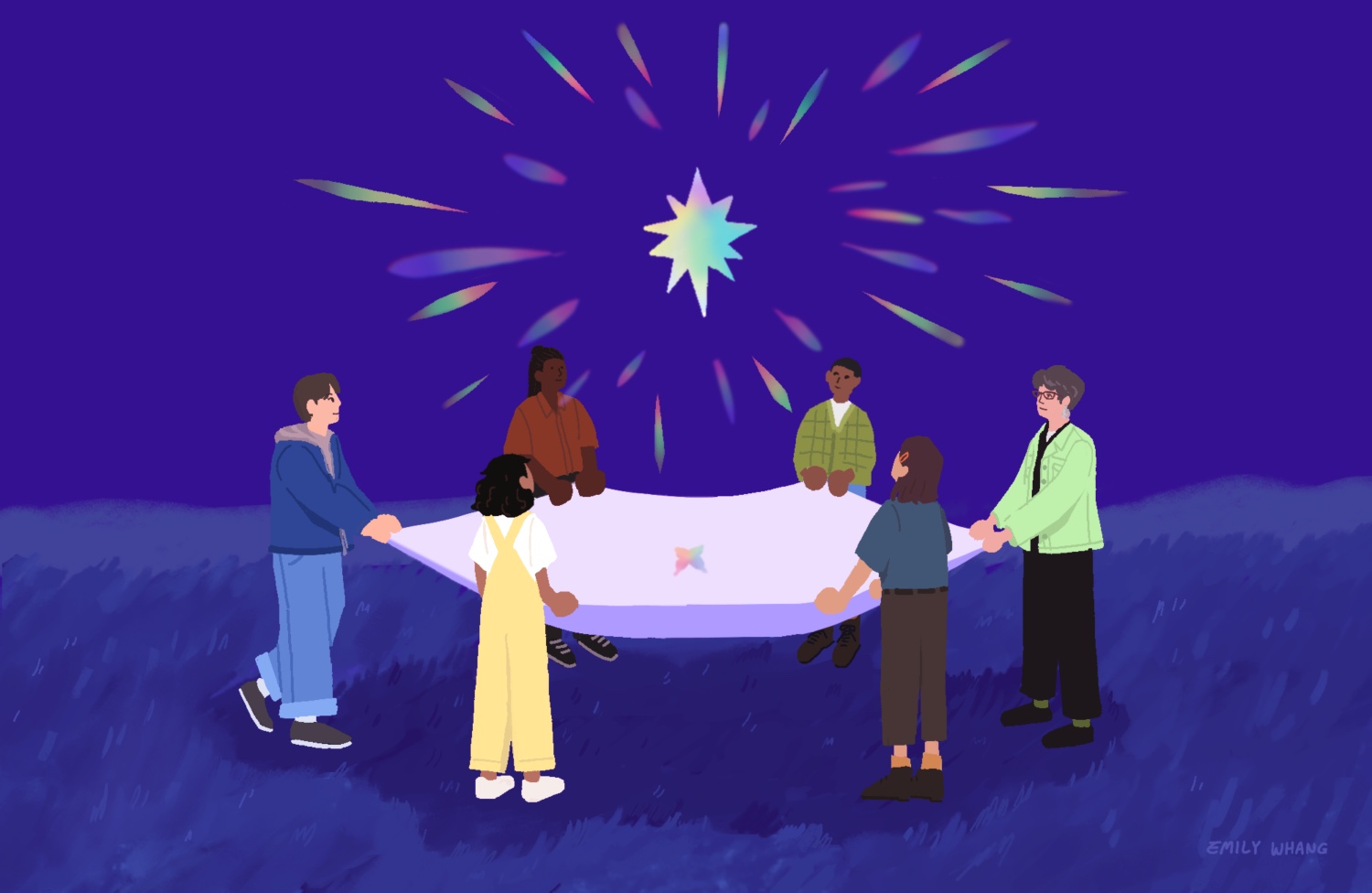 From a young age, Sandra Whitley knew she would live a unique life. At first it looked like she might become an Olympian.

“For some reason, I was born fast. I was in Junior Olympics and everybody thought I was going to the Olympics,” Whitley said. “Everything was looking good.”

Then in an instant, things changed: Whitley was caught kissing girls.

“That didn’t go over too well,” she said. “The school district actually tried to get me kicked out of school indefinitely, and my parents ended up putting me in a mental institution.”

It was the mid-1970s. Whitley lived in the South and being gay was still essentially considered a disease.

“I can tell you that women were raped [in the institution]. If you did something wrong, you were put in a 2-by-4 padded cell,” she said.

Shortly after her time there and partly because of it, her family uprooted from rural West Texas to San Antonio.

Whitley’s next hurdle was during college, when she officially came out to her parents.

“They disowned me, and we didn’t speak for 20 years,” Whitley said. “So I was very depressed, to be honest.”

She went looking for peace and began traveling the world. Along the way, she discovered her mission was to help young adults who also felt ostracized for being queer.

“Then I started researching and found that in the United States, you know, there’s 1.6 million homeless youth,” Whitley said. “They say that 40 percent are LGBT, and in the South … probably about 50 percent are LGBT.”

It hit her hard that 40 years after she had been institutionalized, so little had changed and so little was being done to help.

“If there’s such an epidemic of homeless youth and homeless LGBT youth, there must be a lot of shelters,” Whitley said. “There was zero in Texas.” 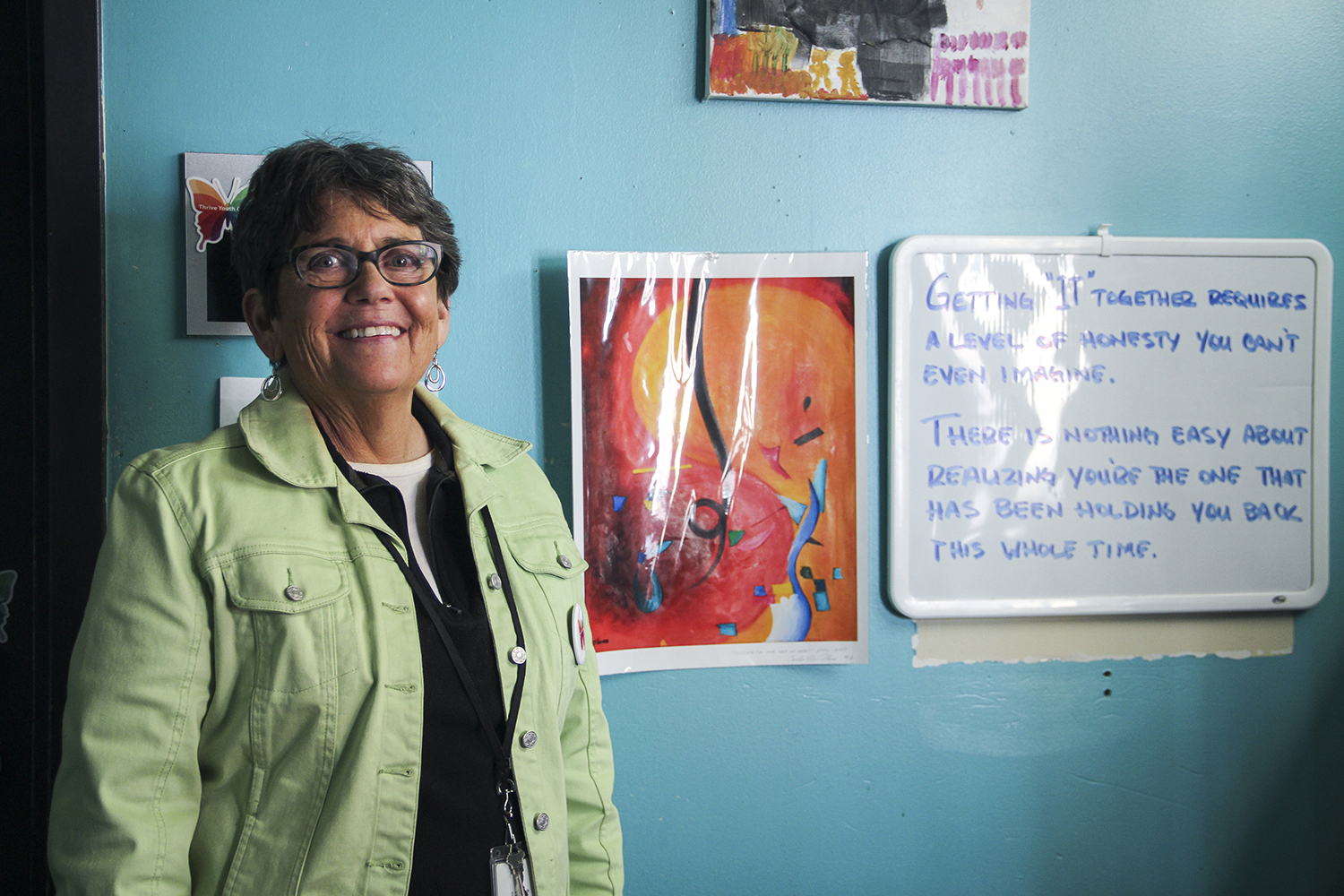 Sandra Whitley, founder and executive director of Thrive Youth Center, stands in a hallway decorated with motivational messages and artwork at her San Antonio shelter for LGBTQ+  youth. (Photo by Solomon Wilson)

After a visit to New York City’s largest LGBTQ+ youth shelter, the Ali Forney Center, Whitley was determined and inspired to open her own shelter in San Antonio.

She volunteered for an outreach program and began to build connections with the unserved youth sleeping under bridges and highways throughout the city.

“You know, I don’t think that they trusted me and I don’t blame them,” Whitley said. “I didn’t trust anybody, either.”

She told about 10 individuals she was in the process of getting a place for them; she assured them she would be back.

When she returned, she found, “they all painted their nails the same color so I wouldn’t forget them,” Whitley said. “Like I was going to forget.” 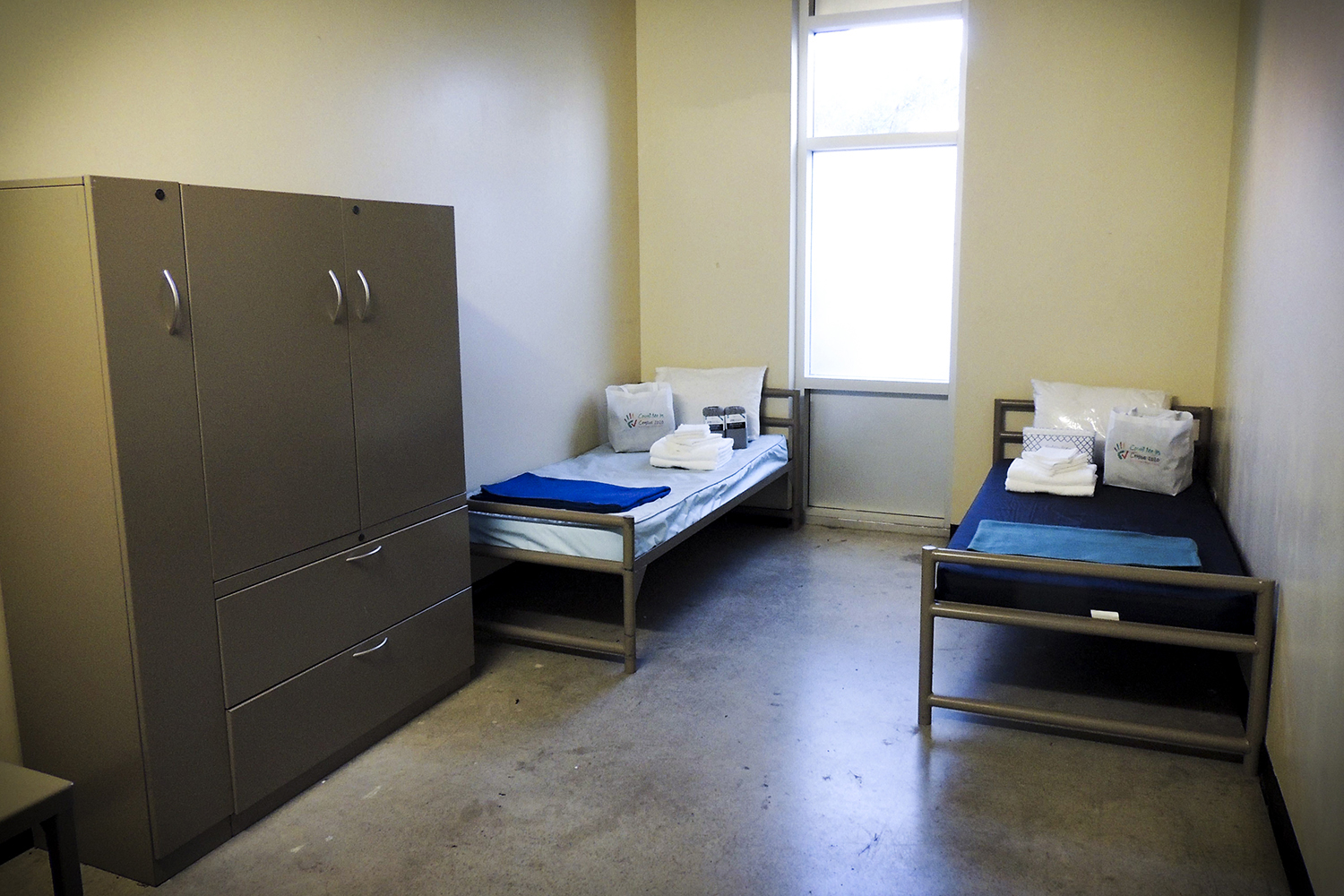 Her first plan fell through. But the trust the youth placed on her pushed Whitley to fulfill her promise: She would shelter these teens – whether in hotel rooms or a rental house; no one would be left behind. In 2015, Haven for Hope, Texas’ largest transition center, reached out to her and she was able to establish an official home for Thrive Youth Center.

Housed in its own wing on the campus, Thrive provides youth 18-24 their own rooms, showers, counseling, medical care and transitional services.

“I know how it feels to be absolutely alone. But whatever your dream is we will walk through it together and remove every single boundary that is in your way.”

“I know how it feels to be absolutely alone,” Whitley tells the youth. “But whatever your dream is we will walk through it together and remove every single boundary that is in your way.”

Thrive has kept an open-door policy throughout the COVID-19 pandemic. Extra temperature checks, masks and testing have become the new normal, Whitley said. 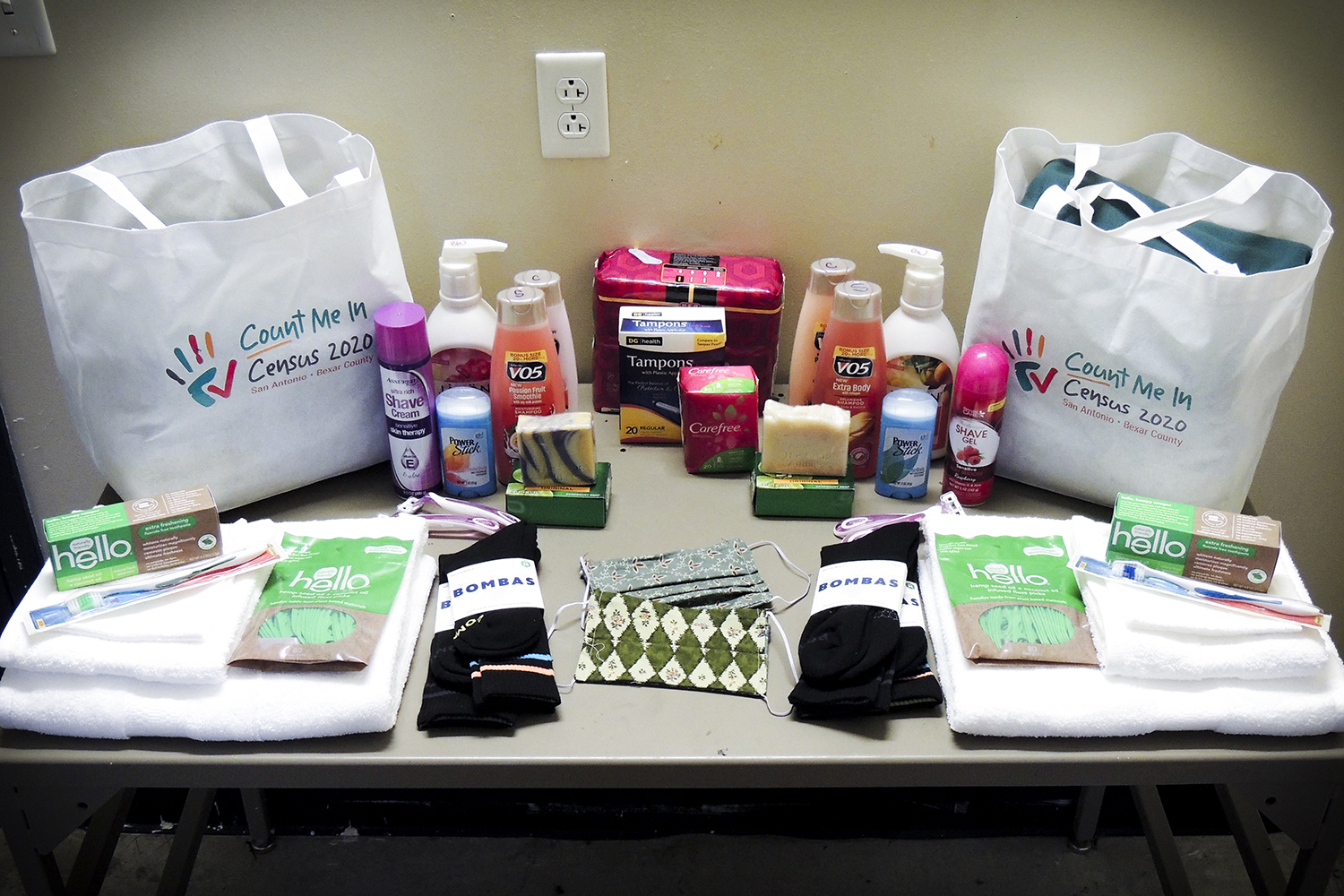 “What you do outside of here impacts us all,” she reminds the youth every day.

With federal pandemic relief money, Thrive has been able to provide homes outside the shelter for over 20 individuals, along with necessities like food, counseling and phones, so they can stay in contact from a safe distance.

While 2020 has thrown curveballs to so many, Whitley said the pandemic reminds her of the lesson she learned when she was 13.

“Thinking I’m going to the Olympics and, you know, the next minute, because I’m gay, I’m locked up in an institution,” Whitley said. “You know, life can change.”

“[The pandemic] has made all of us kind of take a step back and say, ‘Am I really doing what I really want to do? Is there something that I should be doing right now or that I’d love to do?’” she said.

With Thrive, Whitley’s doing exactly what she always dreamed of: helping LGBTQ+ youth.

“I’m here to tell you I give a shit, and you do not have to be alone,” she tells them.

Whitley said she now feels confident Thrive will be here in the future. She hopes to one day open a separate building that will allow youth to drop in, even if they don’t need help for an extended period of time. 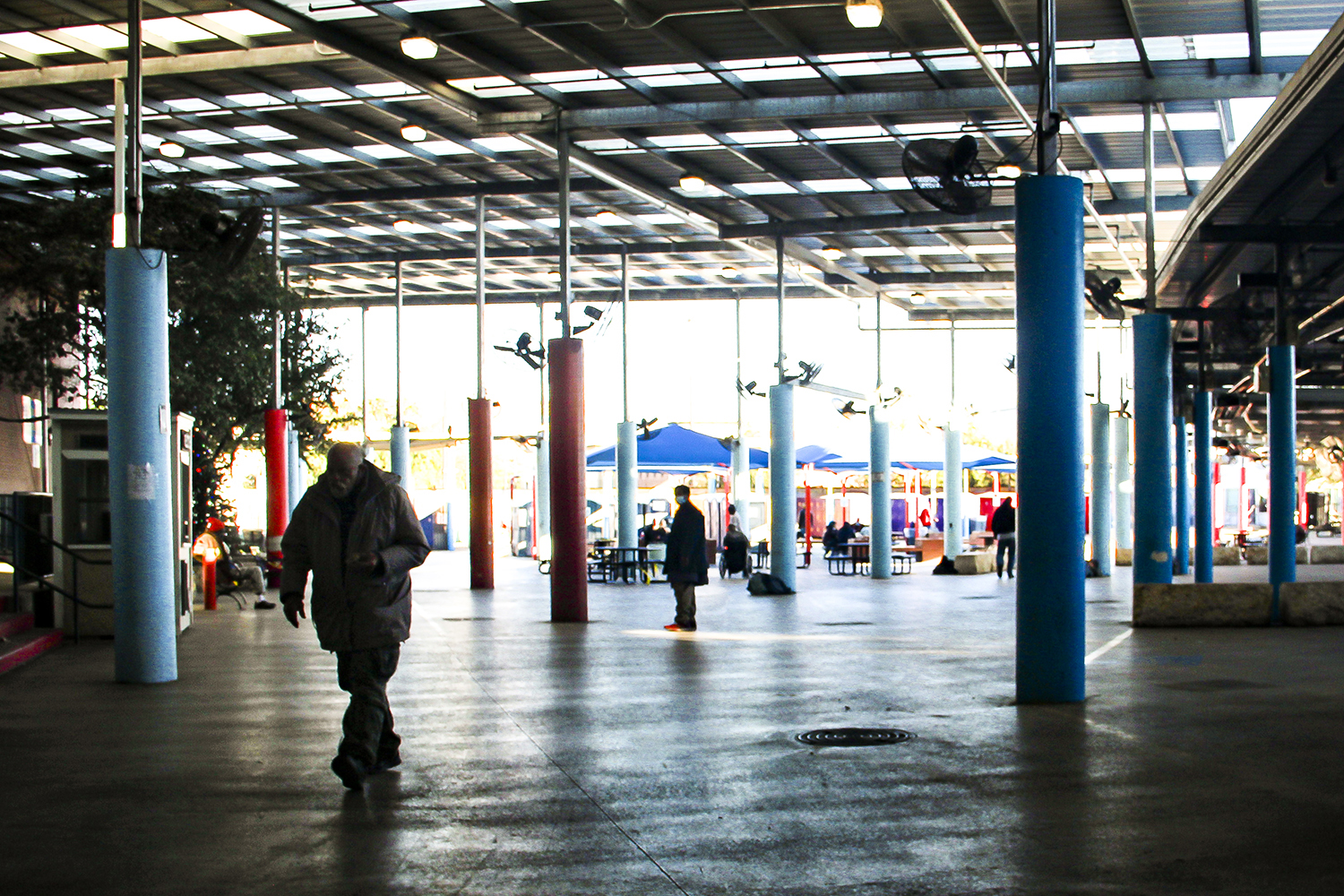 The courtyard outside Thrive Youth Center is shared by residents of the youth shelter and members of the San Antonio community experiencing homelesness. (Photo by Solomon Wilson)